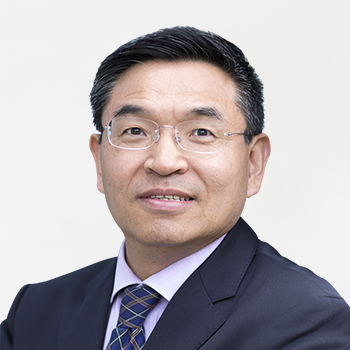 President and Vice-Chancellor
University of Surrey

Professor Max Lu is President and Vice-Chancellor of the University of Surrey. He is a member of the Prime Minister’s Council for Science and Technology, and is on the Boards of UKRI, the National Physical Laboratory, Universities UK, and the Leadership Council of the National Centre for Universities and Business. Locally, he also serves as Deputy Lieutenant of Surrey and a patron of the charity Transform.

Professor Lu lectured at Nanyang Technological University from 1991 to 1994. He then held various academic and leadership positions at the University of Queensland, eventually serving as Provost and Senior Vice-President, before arriving at Surrey in April 2016.

A pre-eminent chemical engineer and nanotechnologist, Professor Lu is a double highly cited academic in the world. He has published over 500 peer-reviewed articles in top journals, with 59,400 citations and h-index of 121.

He is co-inventor of more than 20 granted international patents, and has been honoured with numerous awards including, recently, the Medal of the Order of Australia for his distinguished service to education, international research and Sino-Australian relations.

At the University of Surrey, we pride ourselves on our global outlook and collaborations, and the UGPN forms a unique and valuable part of this vision. The UGPN brings together like-minded institutions from across four continents to work towards shared objectives in education, research and knowledge transfer. I believe that it is through interaction, collaboration and sustainable partnerships that we are able to have the greatest impact on issues of global importance for the benefit of society.